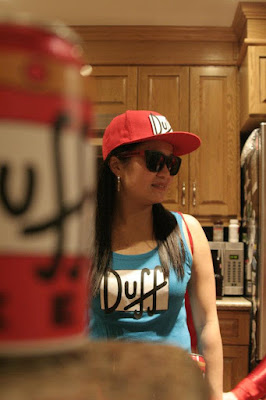 Hope you all had a great Halloween! It has become one of my most anticipated non-stat holiday of the year, mostly credited to my friend Wayne's annual house parties! This year his party was on Oct. 29th, the Saturday before Halloween day. Nice friends and lovely desserts that Wayne always makes, I am inspired to bring a Halloween themed treat to share at the party as well! Enter: Zombie Vomit, recipe courtesy of DearAnge.

Zombie Vomit: If you want to do the two tone, two flavour that I did, the day before make grape jello. Add chopped grapes if you like. For zombie vomit green portion: get lime jello, mix with the boiling water, while hot, whisk in some sour cream to create the opaque green color!!! Add chopped maraschino cherries, crushed pineapple from a can (strain out the liquid first) and any other fruits to your liking, (just do not use fresh pineapple, as the jello will not set). Add slightly less amount of the cold water (with jello you use even parts hot and then cold water usually), to make it a bit thicker than regular jello. Ange created hers with a jelly mold. I love this recipe and it was easy to eat for guests in the portioned clear cups! Tasted really good too.

For my costume, I was Duffgirl, a take off of Duffman from the Simpsons! I personally hate beer but I really like the character. I put together the costume from: Value Village for the top, new leggings and cape also from VV, the red hat from Lids in Chinook Center, the belt was used from Divine off 17th ave, the socks from Sears kids section. The large white duff labels I made on the computer and printed onto sticker paper. The can labels I printed onto regular paper and made sleeves to slip onto the cans. My boyfriend helped me rivet the cans onto the belt. He also had the sunglasses, a promotional item from his work - Perfect! I actually ordered tall white sneaker boots from ebay, but they haven't arrived yet :(. 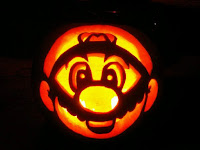 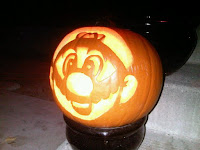 This year's pumpkin... I purchased the pumpkin 3 weeks before halloween! I wanted a really big, "perfectly" shaped one! haha I went a bit more ambitious than I have in previous years, and decided either to do a Calgary Flames themed pumpkin or a Mario one. I found the image of Mario online, Couldn't find a free templates available, but found someone else who did this same face before, and found a graphic of the original face, and printed the original cartoon onto paper. This image was large enough that it used 1 and a quarter sheets of paper (wide). I used sticker paper for the larger portion too, it helps when outlining your design. My friend had this pumpkin carving tool kit and it was amazing to use! Particularly the rolling tiny teeth tool was really useful in outlining the design, and the two saws for cutting the detailed areas. It was my first time not using a kitchen paring knife to cut a pumpkin. I do confess to using the paring knife a couple times for some of the straight, bigger lines, as it cuts really smooth lines and quickly too.

On the actual day of Halloween, it was also my German friend's last night here in Calgary, she made her home made Spaetzle German noodles with lentils and European Sausage. It was so good, and very special as it is something that I'll probably never know how to make myself :p. We also gave out candy, over 60 kids stopped by my boyfriend's house! 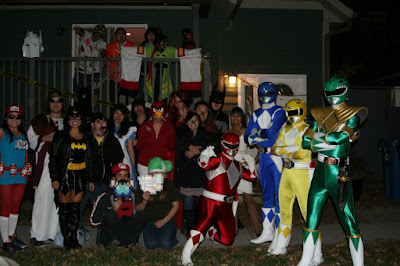 Rozzie
Welcome to my Blog - Artist and Graphic Designer located in Calgary, Alberta, Canada. Specializing in Chalk murals, signage, sidewalks and more! Send me an email to get in touch.